Warning: call_user_func_array() expects parameter 1 to be a valid callback, class 'collapsArch' does not have a method 'enqueue_scripts' in /homepages/30/d155136878/htdocs/brincefieldinfo/blog/wp-includes/class-wp-hook.php on line 308

Have you ever thought about makes someone really attractive to you? Not just physically attractive, but that something more that keeps you coming back.  I am not an expert on relationships, or attractiveness, but I have at least started figuring out what it is that really makes a woman stand out for me.

Different aspects of women stand out more for different men. This is what gives rise to men saying they are “leg men” or “butt men”. And of course, there are the men that are mostly attracted to women’s breasts. Nothing wrong with any of these of course, and I certainly like looking at each of them. But the thing that really makes a woman stand out for me is her smile. 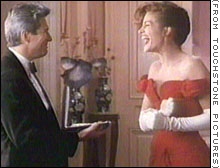 Julia Roberts laughs after Richard Gere surprises her during filming.

Any smile is very nice to see, but some of them change a woman from “nice to look at” to “I want to spend as much time with you as possible.” I don’t know exactly what it is about a particular smile that makes the woman more attractive. It certainly isn’t a function of her overall attractiveness.

Julia Roberts is one woman that does have a starting point for getting my attention. Yes, she is a very attractive woman, even now at age 41 and after 3 children. But there are plenty of very attractive woman, both in and out of the entertainment business. What makes her stand out for me is the scene from Pretty Woman in the picture. When she reached to touch the necklace in the box, Richard Gere snapped the cover down on her fingers. This was not in the script, he just did it as a joke. But her spontaneous reaction resulted in it being placed in the movie.

That reaction, laughter and a huge smile, is what makes her so attractive to me. Enough so that I like her in most of her movies. I can’t say all, I have not seen all of them. But it is likely that I will.

Not that celebrities are the only people that have that kind of smile. In fact, most of them do not have that kind of effect on me. Probably because they have to spend so much of their time smiling for the public, it is hard to see a genuine smile from them. And I have to at least perceive the smiles as genuine for them to make the woman out of the ordinary.

And the two women whose smiles have had the greatest impact on me are not celebrities. I will probably talk about them later. For now, I guess I will just look for more great smiles.